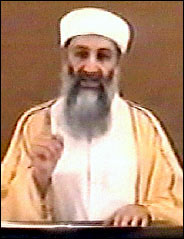 As the candidates traded barbs and made their case in an attempt to win over the American people, al Qaeda leader Osama bin Laden interjected himself into the 2004 election. On October 29, 2004, only days before voters went to the polls all across the United States, the news station Al-Jazeera received a video tape at its offices in Pakistan. The tape showed bin Laden delivering a prepared statement to the world. Within hours the video played on numerous television news broadcasts. Although bin Laden had released several audio recordings between 2001 and 2004, this marked the first time in three years that the terrorist leader had been seen on video.

On the October 2004 tape Bin Laden spoke for around 15 minutes and laid out al Qaeda’s reasoning for the 9/11 attacks. This was a critically important for it was the first time that bin Laden admitted to ordering the operation. While evidence linked the terror leader to the attacks, he had not previously acknowledged his role.1 He told Americans that “your security is in your own hands” and it did not matter who won the election, the United States would not be safe until it ended its wars in the Middle East.

National Security had persisted as one of the most critically important issues for voters in the 2004 presidential election season. In the first contest for the White House post 9/11 a candidate’s position on combating al Qaeda, projecting U.S. power, and bringing Osama bin Laden to justice was of great significance. Both President George W. Bush and Democratic nominee Senator John Kerry attempted to articulate a vision of American strength and determination in fighting terrorism. Kerry argued that better planning and more of a willingness to engage allies was needed in order to better safeguard American interests abroad. He stated that an embrace of multilateralism and engagement with international organizations such as the United Nations best served U.S. foreign policy. President Bush countered that unwavering and steady leadership was necessary in order to wage the war on terror. Leaders in Washington could not spend their time second guessing every decision. The United States needed men of action, sturdy and confident in their policy positions.

Foreign policy was front and center during the party primaries, long before John Kerry claimed the Democratic nomination. As the general election campaign took shape the Bush campaign labeled the Massachusetts Senator as a “flip-flopper” through television ads. The president himself argued that Kerry could not be counted on to prosecute the war on terror. During a March 2004 speech he cast the election as being a “choice between an America that leads the world with strength and confidence, or an America that is uncertain in the face of danger.”2

When the bin Laden video appeared just days before the general election, both campaigns responded immediately. President Bush told reporters that “Americans will not be intimidated or influenced by an enemy of our country. I’m sure Senator Kerry agrees with this…We are at war with these terrorists, and I am confident we will prevail.”3 John Kerry, while speaking in Florida, declared “let me make it clear — crystal clear: as Americans, we are absolutely united in our determination to hunt down and destroy Osama bin Laden and the terrorists.” He added: “They are barbarians. And I will stop at absolutely nothing to hunt down, capture or kill the terrorists wherever they are, whatever it takes. Period.”4

Following George W. Bush’s reelection pundits and Kerry supporters speculated on whether or not the bin Laden video played a role in the president’s victory. Journalists Eleanor Clift and Matthew Spieler wrote, years after the election, that “the video guaranteed that terrorism was the central and defining issue in voters’ minds going into Election Day, and [exit] polls showed that the public trusted Bush over Kerry on that issue by a significant margin.”5 While no conclusive evidence exists to prove the video played a determinative role in the election, it remains clear that it served to remind all Americans that the threat of terrorism would not soon subside.