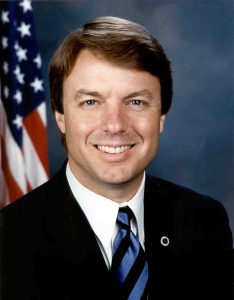 John Edwards campaigned for the Democratic presidential nomination in the 2004 election. He originally rose to prominence in the 1980s and 1990s as a malpractice lawyer, and won several high profile cases during those years. In 1998, he was elected to the U.S. Senate, representing North Carolina. He was an active junior senator, ultimately cosponsoring more than 200 bills.1 He cosponsored a wide range of bills, including the 2002 bill authorizing the use of military force against Iraq, which would become controversial during his presidential campaign.

During his time in the Senate, Edwards was viewed by many Democratic leaders and political commentators as a dynamic politician and strong contender for 2004. In 2001 and 2002, he began laying the groundwork for a presidential run in 2004, participating in official trips to the Middle East and Central Asia, as well as forming a PAC called The New American Optimists.2 He was profiled in several national media outlets, including Vanity Fair, GQ, and The New Yorker. Many potential voters were drawn to Edwards’ boyish charm, his family, his southern-ness, and his willingness to be outspokenly liberal, especially on domestic issues. As The New Yorker noted in the spring of 2002, “Edwards is a political novice who aims at communicating to people one wouldn’t ordinarily think of as populists—middle-class and lower-middle-class suburbanites—that he completely gets it (“it” being the way the big guys are messing with their lives), and that he’s going to do something about it.”3 His relative freshness in politics, his personable demeanor, and his populist rhetoric appealed to many Americans who had perceived of Al Gore as an “elite” and a “Washington insider” in 2000.

Edwards officially declared his candidacy in September 2003, and entered into an already crowded field that would eventually include ten candidates. By November, Howard Dean was edging ahead in many polls. He had raised more money than the other candidates, and set himself apart from them (along with Dennis Kucinich) as the strongest and most consistent critic of the Iraq War. Despite Dean’s early fundraising success and strong showing in the polls, the Iowa Caucuses in January 2004 marked a clear point of transition in the Democratic primary season.  John Edwards finished a strong second in Iowa with 32% of the vote, trailing Kerry with 38%, and soundly defeating Dean, who finished third with only 18%.4

Despite his successful showing in Iowa, some criticism dogged Edwards during the primaries and followed him through the general election. Conservatives disliked his positions on taxes and lambasted him both for being a trial lawyer, and for having little foreign policy experience in a post-9/11 world. Some liberals found him too hesitant to critique his fellow candidates; the New York Times speculated in February 2004 that his campaign was intentionally positioning him as Kerry’s running mate.5

Despite these criticisms and speculations, by late February 2004 Edwards emerged as the only major challenger to John Kerry, as Dean had dropped out of the race following the Wisconsin primary on 17 February. During this portion of the campaign, Edwards criticized Kerry more openly as a Washington insider who had supported bad trade agreements.6 However, Kerry scored a decisive victory two weeks later on Super Tuesday, and Edwards subsequently dropped out of the race. In July, a few weeks before the Democratic National Convention, Kerry selected Edwards as his running mate. In his announcement, Kerry praised Edwards’ “middle-class values.”7 He also supported Edwards’ contention that there were “two Americas,” a reference to damaging economic stratification that Edwards underscored in his speech at the Democratic National Convention.8

Ultimately, however, Kerry and Edwards failed to secure a Democratic victory in the general election. Edwards ran again in 2008, but dropped out of the race at the end of January and eventually endorsed Barack Obama. The same year, Edwards was plagued by allegations that he had had an extramarital affair and fathered a child out of wedlock. These personal troubles were compounded by claims that Edwards had appropriated campaign funds to cover up the scandal. In 2011 he was indicted by a grand jury on a series of charges relating to the campaign funds. He was found not guilty on one count and a mistrial was declared on the others. In 2014 he returned to work as a trial lawyer.