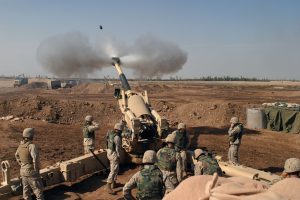 Although it began almost two years before November 2004, the Iraq War persisted as a controversial issue throughout the 2004 election season. The issue of Iraq arose during the period after the 9/11 attacks, when the Administration adopted a policy of preemption designed to “confront the worst threats before they emerge.”1 President Bush and his Administration quickly linked Iraq with Iran and North Korea as part of an “Axis of Evil.” In September 2002, President Bush told the United Nations General Assembly that Iraqi President Saddam Hussein supported terrorist groups, violated human rights, and pursued the development of “Weapons of Mass Destruction”—WMDs—in violation of UN resolutions. On October 16, 2002, the U.S. Congress authorized the President to use force against Iraq “as he determines to be necessary and appropriate.”2 Many UN members, however, remained unconvinced. Rather than continuing to pursue UN authorization for invading Iraq, Bush declared that the United States would move ahead with a “coalition of the willing.” Forty-eight countries agreed to support the war, mostly in exchange for American economic assistance. British Prime Minister Tony Blair and his Polish and Australian counterparts were the only leaders willing to provide troops for the invasion. Key allies such as France and Germany opposed the war. They believed that a war would cause significant instability in the region and argued instead that the UN weapons inspections program should be allowed to run its course.3

At dawn on March 21, 2003, the ground invasion began as U.S. troops drove northward into Iraq from bases in Kuwait. On April 3, U.S. troops reached the outskirts of Baghdad and captured the airport. By April 7, the Iraqi regime had collapsed. Saddam, his sons, and other top regime officials went into hiding.4 With Saddam on the run, President Bush flew to a U.S. Navy aircraft carrier, stood before a banner that read “Mission Accomplished” and declared the end of “major combat operations” in Iraq. But major combat operations were far from over. By July 2003, insurgent attacks on U.S. troops had increased precipitously. General John Abizaid, head of U.S. Central Command, described the situation as a “classical guerrilla-type campaign.”5 In October 2003, violence continued to escalate as insurgents mortared U.S. bases in Baghdad and shot down several helicopters. By November, Defense Secretary Donald Rumsfeld declared: “we’re in a low-intensity war that needs to be won, and we intend to win it.”6

The Administration soon suffered several setbacks. On March 31, four U.S. security contractors were killed in Fallujah, their bodies burned and hung from a bridge. Attacks against coalition troops rose from 200 per week to over 500 per week by Summer 2004. To make matters worse, on April 28, 2004, CBS reported that American troops had tortured prisoners at Abu Ghraib. In addition, U.S forces had not yet discovered evidence of Saddam’s WMD programs. The bipartisan 9/11 Commission reported that they had not found any evidence of an operational relationship between Al Qaeda and Saddam Hussein. Publicly, the Bush administration’s rationale for war seemed to be unraveling and its interrogation policies losing credibility.7

Amidst these issues, the Administration’s critics gained momentum. Left-wing political action committee MoveOn.org sponsored anti-war advertisements and a “Take Back the White House” campaign that raised $750,000. Democratic Presidential candidate John Kerry galvanized support among the political Left by adopting an anti-war stance. Other Democratic Presidential hopefuls also embraced the anti-war Left. Some, such as Howard Dean, had opposed the war from the beginning. The Democrats quickly came to be seen as an anti-war Party, but this caused problems for Kerry. His October 2002 Senate vote in favor of the use of force against Iraq undermined his anti-war credentials. To counter this, and to bolster his appeal to anti-war voters, the Kerry campaign emphasized his Vietnam era anti-war advocacy. Conservative groups such as Swift Boat Veterans for Truth, however, charged that Kerry had misrepresented his military service record. At a March 2004 rally, Kerry responded to a question about his decision to vote against an $87 billion appropriation for military operations. In what he later described as “one of those inarticulate moments,” Kerry clumsily said “I actually did vote for the $87 billion before I voted against it.”8

The Bush campaign immediately latched on to the gaffe. Television commercials and statements by leading Republican officials accused Kerry of “flip-flopping” on important issues. On the Iraq War alone, Kerry “flip-flopped” on the $87 billion appropriation and the 2002 resolution authorizing the use of force against Iraq. The Bush campaign insisted that Kerry would make a weak and indecisive President.

In contrast to Kerry, the Bush campaign created an image of President Bush as a steady, unwavering leader. At the Republican National Convention, New York Governor George Pataki hailed Bush’s “supreme guts.” Retired General Tommy Franks declared that Bush had “the courage to stand up to terrorists and the consistency necessary to beat them.”9 Despite the Administration’s failure to prepare for the growing Iraqi insurgency, coalition forces had captured Saddam and killed his sons, toppled the regime, and, on June 28, 2004, installed an Iraqi Interim Government to replace the Coalition Provisional Authority.10 These developments, combined with the Administration’s commitment to holding elections for a permanent Iraqi government in January 2005, suggested that the war was being won. Progress was being made, the Administration asserted, and the American people should not “change horses midstream.”

This message resonated with many national security-conscious Americans, even while overall support for the Iraq War decreased. American attitudes toward the war continued to favor the use of force as the “right decision” until after the 2004 election. When the war began, 72% of Americans polled supported it. That percentage declined to 55% in March 2004, and to an even split by February 2005. Public opinion did not consistently and decisively turn against the war until late 2005 and early 2006.11 The 2004 election therefore occurred at a time during which a slim majority of voters still accepted the Administration’s claims that Iraq was on a path toward peace and that the invasion had made America safer. Bush’s reelection campaign ended victoriously, but American attitudes toward the Iraq War soon soured.