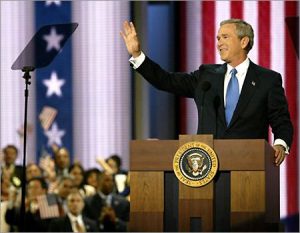 George W. Bush was the 43rd President of the United States. In 2004 he was running for his second term in office as the Republican Party’s nominee. Bush accepted his party’s nomination at the Republican National Convention on Thursday September 2, 2004 in Madison Square Garden in New York City. The location choice inevitably drew (and draws) public attention to the terrorist attacks of September 11, 2001, the most important moment of the first Bush term, and a defining element of his 2004 campaign for reelection.

The presidency of George W. Bush can be marked by crises, beginning with the terrorist attacks of 9/11 and ending with a financial crisis that threatened the stability of America’s economic system. In his memoir Decision Points Bush refers to his experience in the presidency as “eight consequential years” of “decision making in a complex environment.”1 Those memoirs are structured around the crises he faced from 9/11, to the Iraq War, to Hurricane Katrina, to the 2008 financial crisis.

In an article in Political Science Quarterly James E. Campbell sums up the reasons Bush won reelection with four words in his subtitle: incumbency, ideology, terrorism, and turnout. All four elements were clearly part of the campaign for Bush and, more importantly, they reflect something of the character of the man at this particular moment in his life.

In his memoir President Bush reflects on his feelings about his incumbency as an aspect of the campaign. He writes, “In some ways, the 2004 campaign was easier than 2000. I benefited from the trappings of the presidency, especially Air Force One and Marine One. In another way, 2004 was tougher. I was both candidate and president. I had to strike a balance between the two.”2 This is the statement of a man who was clearly cognizant of both the advantages and challenges that came with running for reelection as president. 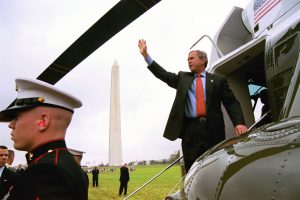 Incumbency, however, could be seen as more advantage than challenge for Bush circa 2004.  His campaign had the advantage of stressing his thus-far successful handling of the war on terror, and the subsequent advance of his freedom agenda. These themes appeared in Bush’s convention speech in New York where he said, “I believe in the transformational power of liberty. The wisest use of American strength is to advance freedom.” The confidence these themes engendered was reflected more humorously in the speech when said, “Some folks look at me and see a certain swagger, which in Texas is called ‘walking.’”3 This was a persona the Bush campaign placed in contrast to his its portrayal of his opponent Sen. John Kerry who was portrayed as effete and out of touch, a windsurfing, flip-flopping liberal.

Trent, Friedenberg, and Denton argue in Political Campaign Communication: Principles and Practices that “in 2004, with the war on terror being waged, President Bush attempted to portray himself as a strong wartime leader. At one point he observed, “I made some tough decisions. But people know where I stand.”4 The idea of President Bush demonstrating strength in the face of adversity came through perhaps most powerfully in his 2004 campaign ad titled Safer, Stronger.

The ad is fairly simple featuring no voice over, but instead, just a series of images with text describing a series of problems facing the country early in Bush’s first term. It then shows more positive imagery, including footage of Bush, along with the text, “Today America is turning the corner. Rising to the challenge. Safer. Stronger.”

The 2004 campaign emphasized not only President Bush’s public ideology, but his private ideology as well. Just as in the 2000 presidential campaign, Bush’s Christian faith and emphasis on moral values played an important part of his reelection bid. In the 2004 race Bush won 78% “of the votes of those who said that they were evangelicals or born-again.”5 Virginia Tech communication professor Robert E. Denton notes that Bush was obviously not the first president to discuss religion. However, he argues that there was in the decades leading up to the Bush presidency a growing “religion gap” in America between two divided groups of Americans who placed very different levels of importance on religion in their lives.

Bush enjoyed support not just among evangelical Christians but also from a significant number of people on the more religious side of the “religion gap.” Denton cites a Time poll from 2004 that found that “Americans who consider themselves very religious preferred Bush 59 percent to Kerry 35 percent.” Denton also quotes Richard Land, then of the Southern Baptist Convention, who said that Bush’s “heartbeat is close to the heartbeat of Southern Baptists when it comes to very serious and important public policy issues.”6

President Bush’s ideology and personality were also reflected in how his 2004 campaign team conducted itself. Journalist and Princeton University professor Evan Thomas describes Bush during the 2004 campaign as “a zealot for order” running a campaign that was a “tightly wound, top-down, on-time-to-the-minute operation” where the “dress code was corporate and the atmosphere vaguely martial.”7 The tightly run corporate atmosphere of the 2004 campaign arguably helped the campaign overcome its previous shortcomings.  For example, during the closing days of the 2000 campaign, news broke about Bush’s 1976 DUI incident.  Bush strategist Karl Rove believed that the campaign did not respond well enough, resulting in “nearly four million Evangelicals [staying] home on election day [sic].”8 By 2004, the Bush campaign managed to turn out that same voting block on Election Day, something that contributed significantly to the President’s reelection.

The Bush image of strength of character and management were reflected most clearly in a single statement during a press conference two days after Election Day. Bush said of his reelection, “Let me put it to you this way. I earned political capital in the campaign, political capital, and now I intend to spend it.”9 Bush argued in that press conference that the American public had voiced support for his agenda and that he planned to move forward with policies he had outlined during the 2004 campaign.

7Evan Thomas, Election 2004: How Bush/Cheney Won and What You Can Expect in the Future (Cambridge, MA: Perseus Books,2004) p. xxiv.