Faith, the White House, and the Public Square - at the SMU Center for Presidential History 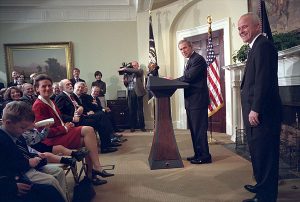 One of the most significant domestic policy initiatives promoted by the Bush campaign during the 2004 presidential race concerned the mobilization of private religious groups to meet public needs.  President Bush had worked to establish the White House Office of Faith-Based and Community Initiatives (OFBCI) early in his first term.  Created by an Executive Order in January 2001, the office is now known as the White House Office of Faith-Based and Neighborhood Partnerships (OFBNP) and continues to operate under the Obama administration.1

Bush had a history of working with faith-based organizations to achieve social goals as governor of Texas.  The Personal Responsibility and Work Opportunity Reconciliation Act of 1996 had made it possible for federal agencies to use public dollars to support the work of faith-based organizations (FBO) if they were meeting public needs.2  The federal version of the Bush policy was similar to what he had begun in Texas.  The concept was to provide federal funding to support the public good accomplished by faith-based groups without placing undue restrictions on their personal theological and moral commitments.  Organizationally, the Bush administration sought to place a “Faith-Based Liaison” in each state who could serve as coordinator and mediator between the federal government and the FBOs.  The Faith-Based Liaison was also responsible for coordinating with state agencies.  In addition, the OFBCI sponsored conferences at the state and national level to inform faith community leaders of the federal benefits available to them.3

Much like his international and domestic policy initiatives to deal with the war on terror, the policies Bush had enacted to support faith-based initiatives had been active long enough to draw some criticism by the election cycle of 2004.  Bush defended the partnership with faith groups that his administration had forged at the White House Conference on Faith-Based and Community Initiatives at Los Angles in March 2004.  Bush insisted:

A contrary view was represented by pundits such as Andrew Sullivan, who entitled a Time editorial piece “The Nanny in Chief” in February 2004.  Sullivan wrote:

His faith-based initiative largely withered on the vine, but he has done what he can.  In last year’s State of the Union message, he proposed almost half a billion dollars to pay for mentors for disadvantaged high school students or the children of prisoners. . .  Ever wonder who these government-backed mentors are?  And what exactly they’re preaching?  Maybe you should, because you’re paying for them.5

Sullivan ended his argument with an objection common to opponents of the faith-based initiatives:

There has always been a tension in conservatism between those who favor more liberty and those who want more morality.  But what’s indisputable is that Bush’s “compassionate conservatism” is a move toward the latter-the use of government to impose and subsidize certain morals over others.  He is fusing Big Government liberalism with religious-right moralism.  It’s the nanny state with more cash.  Your cash, that is.  And their morals.6

Bush was more concerned that faith groups recognize that the government would not try to control their mission or beliefs than he was about the potential blurring of the lines between church and state.  He told his audience in Los Angeles, “But one of the things that I can assure you, our intention is to make sure that you’re able to practice your faith as you fulfill your mission. I told you earlier, you can’t be faith-based if you can’t practice your faith.”7  While faith-based initiatives were controversial for some in the Democratic base, presidential nominee Senator John Kerry (D-MA) also indicated that he supported faith-based initiatives if they were responsibly administered and respected the distinction between church and state.8

The most serious early legal challenge to the Faith-Based Initiatives program was a lawsuit filed by the Freedom from Religion Foundation in June 2004.  The FFRF sought to demonstrate that the cabinet level departments involved in faith-based initiatives showed an undue preference for religious organizations over other humanitarian groups.  They also contended that OFBCI conference organizers violated the establishment clause by fostering an atmosphere more like revival meetings than serious political functions.  The filing and initial presentation of the case occurred during the final months of the 2004 presidential election.   Justice John Shabaz of the U. S. District Court Western District of Wisconsin, ruled in November 2004 that the plaintiffs did not have the standing to sue the executive branch over the use of funds designated as discretionary by congress.  The case continued to move through the appeals process until it was heard by the U. S. Supreme Court as Hein v FFRF in 2007.  The justices decided in a five to four ruling that the FFRF did not have the right to sue the executive branch for organizing faith-based initiatives.9

Despite some of the challenges faced by supporters of faith-based initiatives, Bush’s legacy not only survived but was also expanded in scope under the Obama administration.  President Barack Obama signed an executive order that created the White House Office of Faith-Based and Neighborhood Partnerships in 2009.10  Secretary of State John Kerry, Bush’s opponent in the 2004 election, presided over the creation of an Office of Faith-Based Community Initiatives within the U. S. Department of State in 2013.11  A major focus of the office has been harnessing the energy and gleaning the perspective of faith-based groups in regard to issues of international religious liberty.