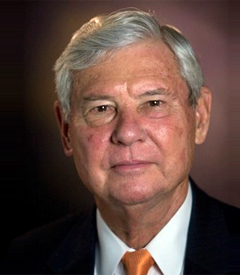 In February 2003, Bob Graham entered the 2004 presidential race, becoming the ninth Democrat, and at 66 years old, the oldest in the field. In a press statement, he declared, “I intend to be the Democratic nominee for president. I am the best prepared to lead, and the most able to win.”1 He had an extensive political resume. He had served in both the Florida House and Senate. Like Askew, he served two terms as governor.  In 1986, he was elected to the U.S. Senate. He won re-election with large majorities in 1992 and 1998. Assessing Graham’s chances for the nomination in 2004, Sandy Maisel identified his string of electoral successes as a plus. “All Bob Graham does is win.”2

In 2004, only California, Texas, and New York had more people and more electoral votes than Florida. While these three states had produced their share of presidents and presidential nominees, Florida had never produced neither. Richard Nixon and Ronald Reagan were elected from California. George H.W. Bush and George W. Bush were elected from Texas. Theodore Roosevelt and Franklin Roosevelt were elected from New York. Before the 2004 race, only one Florida politician, Reubin Askew, made a serious bid for the White House. Askew was a two-term governor of Florida who sought the Democratic Party nomination in 1984. Bob Graham was determined to change this.

Graham believed that being from Florida was an added advantage.  After what happened in the 2000 presidential election, he understood the symbolic importance of winning the state for Democrats.  He frequently reminded Democratic crowds of it, even spelling it out for them: “I am from Florida.  F-L-O-R-I-D-A.”3 Referring to the Bush v. Gore decision, Graham emphatically said, “I will win Florida, and I won’t need the United States Supreme Court to cast the last votes.”4

In a formal speech on May 6, 2003, from his home in the Miami area, Graham formally entered the race, immediately criticizing President George W. Bush’s decision to go to war in Iraq.5 He believed that Bush lost sight of the terrorists who were actually responsible for the 9/11 attacks. In October 2002, when the U.S. Congress voted on whether to provide President Bush the authority to use force in Iraq, Graham joined the minority of Senate Democrats voting against authorization. His position on the war provided him a contrast with several of his opponents for nomination. Senators John Kerry, John Edwards, and Joe Lieberman, and Representative Richard Gephardt all voted to give President Bush the authorization to use force against Saddam Hussein’s regime. In March 2003, as Graham launched his candidacy, the Iraq War began.

Like Edwards, Graham believed that he would be a stronger Democratic nominee against President Bush because he was from the South.6 “I come from the electable wing of the Democratic Party,” he claimed at the first Democratic presidential debate in Columbia, South Carolina.7 Graham had a point: as of 2004, the last three Democratic presidents (Lyndon Johnson, Jimmy Carter, and Bill Clinton) were white southerners. Graham was convinced that Gore had been too quick in conceding the South to Bush. He believed the South could be won by the right Democrat.

As it turned out, Graham was not that Democrat. On October 6, 2003, CNN host Larry King said, “Senator Bob Graham, Democrat of Florida, announcing that he is withdrawing from the race.  Officially, he’s out.”8 Before a single vote was cast in the 2004 Democratic Party presidential nomination contest, from a field of ten candidates, the senior senator from Florida became the first Democrat to exit the race.

Graham explained, “I’m leaving because I have made the judgment that I cannot be elected president of the United States.”9 He cited the lack of organization and the lack of sufficient funding. He also said that he probably made a mistake by entering the race late. Graham further believed that his presidential run was interfering with his committee work in the Senate. Finally, his health was an issue. He had undergone heart surgery early in the year. At the time, according to the Gallup Organization, Graham stood at 4 percent nationally and approximately 50 percent of Democrats still did not know enough about him to form an opinion.10 The next month, he declared that he would not seek a fourth Senate term. Graham was one of five southern Democratic senators not to seek re-election. Ultimately, a Republican would win Graham’s seat and the other four vacated seats in 2004.

Alongside Gephardt, Jeanne Shaheen, and Tom Vilsack, Graham became a finalist for the vice-presidential nomination after he exited the presidential race, a position that eventually went to Edwards. He had been considered for the vice presidency by Michael Dukakis in 1988, Bill Clinton in 1992, and Al Gore in 2000.11