The Killian Documents and 60 Minutes 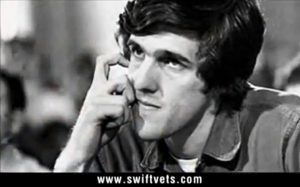 Swift Boat Veterans for Truth was a “527” political advocacy organization that strongly opposed Democrat John Kerry in the 2004 campaign. Despite Kerry’s official honorable military record, the organization contended that Kerry had conducted himself dishonorably during his Vietnam service, and was therefore “unfit for command.”  The Swift Boat Veterans’ New York Times bestselling book Unfit for Command, and their now famous television ads experienced great success during the campaign.  These attacks succeeded, in part, because they resonated deeply with long-held American divisions over the Vietnam War, and with long-standing suspicions that the Democratic Party was weak on national security issues.  In a time of post-9/11 fears and wars in Iraq and Afghanistan, these advertisements undercut the idea of Kerry as a strong commander-in-chief at a crucial stage in the campaign and contributed to Bush’s November reelection.

The historical road to the Swift Boat Veterans for Truth’s attacks on Kerry starts in the quagmire of the divisive Vietnam War.1  John Kerry, a decorated naval veteran, first found fame as spokesman for Vietnam Veterans Against the War (VVAW).  On April 22, 1971, Kerry appeared before the Senate Foreign Relations Committee, calling the war a “mistake,” urging its speedy termination, and describing “war crimes” that veterans had confessed during VVAW’s Winter Soldier Investigation earlier that year.2  These veterans’ efforts galvanized the antiwar movement and posed a threat to Richard Nixon’s Vietnam policy.  The administration countered with various tactics.  It aimed to “destroy the young demagogue” Kerry, referred to VVAW members as “alleged veterans,” and strongly supported the newly formed Vietnam Veterans for a Just Peace, a pro-war organization led by veteran John O’Neill.3  In a famous moment, O’Neill debated Kerry and defended Nixon’s policy on the Dick Cavett Show.

While VVAW’s membership drastically outnumbered that of the Nixon-sponsored group, the two together symbolized real divisions over how people believed the Vietnam War experience should be understood.4  Even after the war, bitter disagreements over “the lessons of Vietnam” perpetually lurked beneath the surface of American politics.5  In 2004, these disagreements resurfaced with a vengeance.

The attacks of 9/11 and the American response to them ensured that questions of war and national security dominated the 2004 campaign.  George W. Bush had declared war on terror and invaded Afghanistan and Iraq.  Democrats responded by nominating Kerry, whose biography as a decorated veteran, they hoped, would protect him from attacks on his toughness or ability to lead the country in wartime.6  Democratic Party Chair Terry McAuliffe considered Kerry’s “chest full of medals” one of his strongest assets.7

Kerry’s opponents soon understood that they could strike at the heart of his campaign by questioning his Vietnam service, together with his statements on behalf of VVAW.  Under federal campaign finance law, individuals could form so-called “527” organizations to raise and spend unlimited money for political advocacy, as long as they did not coordinate with or endorse particular candidates.  Additionally, by 2004, the “new media” of talk radio, blogs, and 24-hour news channels, particularly in the conservative vein of Fox News, was challenging the control of news traditionally exercised by the major networks and newspapers.8  All of these elements created an environment in which groups like Swift Boat Veterans for Truth could seriously affect the election.

Swift Boat Veterans for Truth announced its formation at a May 4, 2004 press conference at which Admiral Roy Hoffmann, Kerry’s former commanding officer and the group’s leader, denounced Kerry and called for his exit from the race.  The announcement drew little notice, but Hoffmann and his allies were committed to opposing Kerry and turned to recruiting more savvy political expertise to the campaign.  Two crucial recruits were John O’Neill, Kerry’s antagonist from 1971, who became chief fundraiser and spokesperson, and Chris LaCivita, a longtime Republican political consultant, who would mastermind the group’s media relations.  Over the summer, the veterans recruited additional members, who often shared real feelings of outrage at Kerry, specifically for his 1971 testimony, which they took as a personal attack.  The Bush campaign avoided getting too close to the group, but also “did nothing to discourage its growth.”9

Kerry exited the Democratic Convention on July 29 with some momentum and a lead over Bush of somewhere between 3.8 and 6 percentage points.10  One week later, the day after a preview by Sean Hannity on Fox News, the Swift Boat Veterans released their first television ad, “Any Questions?”  The commercial debuted in the battleground states of Ohio, West Virginia, and Wisconsin, and featured multiple Vietnam veterans.  One by one, every veteran, including Lieutenant Commander and Medical Officer Louis Letson, accused Kerry of lying about his service and his injuries.  Kerry, they claimed, “dishonored his country”, “cannot be trusted,” and did not deserve his bronze star, purple hearts, or any other accolades or honors.11

The advertisement’s effects quickly outstripped its low buy-in cost of $500,000.12  Immediately, the commercial began appearing all over television and online media.  In response, donors sent millions of dollars to the group, adding to the serious money that O’Neill was already receiving from wealthy Texas Republicans, including Bob Perry, T. Boone Pickens, and Harold Simmons.13

The advertisement ushered in a period of decline for the Kerry campaign, which, shepherding resources and not expecting the accusations to gain traction, waited two weeks before responding.14  By August 30, as the Republican National Convention began, Kerry and Bush were polling neck-and-neck again.  Most damaging of all, Kerry’s Vietnam service had become controversial, rather than reassuring, and it was largely dropped from the remainder of his campaign.15

The Swift Boat Veterans for Truth and its effective television advertisements (the most memorable of the campaign) became one of the most important elements of the 2004 election.  The ads were endlessly parsed within the context of a new media environment and an anxious electorate divided over questions of war and national security.  The group capitalized on this context by combining it with decades-old anger over criticism of the Vietnam War and contemporary disapproval of Democrats like Kerry who criticized the war in Iraq.  Ultimately, the group’s efforts succeeded so well that the verb “swift-boat” has entered the Oxford and American Heritage Dictionaries.16  However, as those entries define it, “swift-boating” refers to public campaigns which utilize “personal attacks” and “exaggerated or unsubstantiated allegations.”  Thus, while the Swift Boat Veterans for Truth succeeded in helping to defeat John Kerry, they did so in a way that many remember as a low point in modern U.S. politics.17

1On the many ways in which post-Sixties politics is largely shaped by arguments over the Sixties, including the Vietnam War, see Bernard von Bothmer, Framing the Sixties:  The Use and Abuse of a Decade from Ronald Reagan to George W. Bush (Amherst, MA:  University of Massachusetts Press, 2010).

2Andrew E. Hunt, The Turning:  A History of Vietnam Veterans Against the War (New York:  New York University Press, 1999), 109-110.  Also see Gerald Nicosia, Home to War:  A History of the Vietnam Veterans’ Movement (New York:  Crown Publishers, 2001).  “With only a small leap of imagination, one could argue that the 2004 presidential campaign began on April 22, 1971.”  Marvin and Deborah Kalb, Haunting Legacy:  Vietnam and the American Presidency from Ford to Obama (Washington:  Brookings Institution Press, 2011), 220.

3The administration’s efforts were led by Charles Colson, “Nixon’s hatchet man,” in the words of the Wall Street Journal.  Hunt, 184.  The “demagogue” quote is from Colson.  There is some disagreement over which came first, the Nixon administration’s desire to challenge Kerry’s antiwar effectiveness by creating “a counterfoil” or O’Neill’s group.  Colson insists that the administration “found a vet named John O’Neill and formed a group,” while O’Neill insists that the group was formed “a little bit before Colson knew who we were.”  See Joe Klein, “The Long War of John Kerry,” New Yorker, December 2, 2002, academics.smcvt.edu/dmindich/John%20Kerry%20article.htm (accessed August 21, 2004), Michael Dobbs, “After Decades, Renewed War On Old Conflict,” Washington Post, August 28, 2004, p. A01, www.washingtonpost.com/wp-dyn/articles/A39956-2004Aug27.html (accessed August 21, 2014), and Kalb and Kalb, 222.

14Kalb and Kalb, 226; Ceasar and Busch, 120; Larry J. Sabato, “The Election That Broke the Rules,” in Divided States of America:  The Slash and Burn Politics of the 2004 Presidential Election (New York:  Pearson Longman, 2006), 76.  A parallel can be drawn between Kerry’s slow response to the Swift Boaters’ attacks against him in 2004 and the mistakes of the Michael Dukakis campaign of 1988, which refused to respond forcefully to the negative campaign tactics of the Republicans, including the infamous Willie Horton ads.  As Michael Dukakis himself later observed, “The lesson of the 1988 campaign is that negative campaigning must be dealt with head-on.”  Von Bothmer, 214.