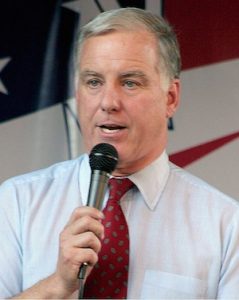 Howard B. Dean was born on November 17, 1948 in New York City. He grew up in in East Hampton on eastern Long island, the eldest of four boys. He received his medical degree in 1978 and practiced medicine thereafter in Vermont.  In 1983, Dean entered the world of politics, winning a seat in the Vermont House of Representatives where he served on the Education committee.  In 1985 he became the minority whip, while still practicing medicine. He won the race for Lieutenant Governor in 1986. On August 13, 1991 Vermont Republican Governor Richard Snelling unexpectedly died. Howard Dean was conducting a physical examination on a patient when he heard the news. He was sworn in as the 79th governor of Vermont the next day.1

Howard Dean served as governor from 1991 to 2003. During his tenure, Vermont balanced the state’s budget 11 times and raised its bond rating. He announced in September 2001 that he would not seek reelection in 2002. He then spent much of the next two years canvassing the country, founding a political action committee, and ultimately declaring his candidacy for the 2004 Democratic Party nomination for President on June 23, 2003.

Howard Dean brought a unique platform to the Democratic table in 2004.  Because of his fresh and principled stands, his previous long-shot status from late-2002 quickly evaporated. He remained perhaps the most vocal critic of the war in Iraq.  During his foreign policy speech at Drake University, on February 17, 2003, he argued that President Bush had never made convincing case for war in Iraq as necessary for defending American territory, citizens, allies, or essential interests. Dean maintained this stance throughout his bid to secure the Democratic nomination. He was opposed changes to the U.S tax code (tax cuts) passed in 2001 and 2003 during the presidency of George W. Bush, arguing that the middle class received no benefit from such cuts. Dean criticized the Bush administration for the federal budget deficit as well. He proposed repealing the Bush tax cuts to provide tax cuts to the middle class, and to pay for health care reform. He also indicated that he would put the U.S on a path to balance the budget (but he did not provide specific solutions other than eliminating the Bush tax cuts).

The Howard Dean campaign may be best remembered today for its innovative fundraising model. Dean’s team quickly realized the power of the Internet and signed a partnership with Meetup.com to integrate Meetup functionality into the campaign’s web page. Dean supporters who called themselves the “Deaniacs” organized gatherings in several states on the first Wednesday of every month to talk about the campaign. The best demonstration of the power of the Internet took place in mid-2003. Vice-President Dick Cheney had announced a $2,000-a-plate fundraising event in Columbia, South Carolina. Dean challenged his supporters to beat the money-raising efforts of the Vice-President, without using the same high-dollar tactics. In the end, 1,500 people attended the Cheney event and raised $300,000, while 9,621 people contributed to Dean’s campaign and raised more than $500,000. By September 2003, Howard Dean had raised $25.4 million, well ahead of fellow Democrat candidates John Kerry ($20 million), John Edwards ($14.5 million), Dick Gephardt ($13.6 million), and Joe Lieberman ($11.7 million).  By the same time, however, Dean still trailed far behind President Bush, who had raised more than $ 84.6 million.2

By late Summer 2003, Howard Dean had made the covers of Time, Newsweek and Rolling Stone and had emerged as the clear front-runner, with a lead over his rivals in most polls of potential Democratic. He received endorsements from The American Federation of State, County and Municipal Employees (AFSCME), the Service Employees International Union, and from several prominent Democrats such as former Vice President Al Gore, former US senator Bill Bradley, and Carol Moseley Braun, who had recently dropped out of the primary herself.

Howard Dean entered the first contest for the 2004 nomination in Iowa on 19 January as the favorite.3

Until 18 January, Dean led in most polls (Survey USA, MSNBC/Reuters Zogby, Research 2000 for KCCI).  Beginning on 18 January, Senators John Kerry and John Edwards showed upward movement, claiming the top spots in a Des Moines register poll, with Dean in third place. In the end, Kerry won the contest, beating Edwards by 6 points (37% to 31%), with Dean finishing third with 18%.

Iowa was a disappointing moment for Howard Dean. During a post-caucus rally, he delivered a spirited speech, in which he attempted to fire up his supporters with what appeared to be loud outbursts or screams.  Although it is now known that audio/visual problems plagued the taping of the event, the episode damaged Dean’s image, and has come to be known in popular culture as “the Scream.”

The National Journal’s Hotline, estimated that these 23 seconds were broadcast more than 600 times on cable and network news in the days following the Iowa contest. This count did not include local news affiliates or talk shows. Comedians and late night talk show hosts mocked Dean for weeks.6

Howard Dean suffered another loss in the New Hampshire primary on 27 January 2004. He ended his campaign after finishing third in the Wisconsin primary on 17 February 2004. One month later, on 25 March 2004, he endorsed John Kerry.

In 2004 Howard Dean transformed political campaign with the use of the Internet to organize meetings and raise funds. In 2007, while seeking the Democratic nomination for president, then senator Barack Obama recruited Joe Rospars (Dean’s former web strategist) to develop the campaign’s online presence (Barackobama.com) and a Facebook page. Rospars and a group of former web strategists on the Dean campaign helped the Obama campaign in integrate digital tools into the campaign’s fund-raising and field operations.6 Howard Dean did not win the democratic nomination in 2004, but the innovative fundraising strategies his campaign team pioneered in 2004 are still used today.

5Howard Dean with Judith Warner, You Have the Power: How to Take Back Our Country and Restore Democracy in America. (New York: Simon & Schuster, 2004), 142-44.