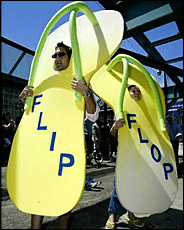 In his list of the top 25 negative campaigns of all time Kerwin Swint begins his countdown with the 2004 Kerry/Bush race. One of the most prominent elements of that negativity was the accusation that Sen. John Kerry was a “flip-flopper.” As Swint notes, Bush called Kerry a flip-flopper “for saying different things at different times about Iraq, the terror war, and economic policies.”1 This was a key strategy for the Bush campaign: to paint Kerry as lacking credibility, as “someone who said things only for political gain.” University of Georgia professor of rhetoric Roger Stahl argues that the use of the term in the 2004 campaign “implied that Kerry could not even measure up to a fork-tongued, Janus-faced opportunist … ‘Flip-flopper’ meant that in his equivocation, Kerry did not even know what he himself believed.”2

It would make sense that the 2004 Bush campaign would use the flip-flop strategy. In 1992, the George H.W. Bush campaign used the very same accusation against then Gov. Bill Clinton with a TV ad called Gray Dot. The Gray Dot ad featured two politicians giving speeches with gray dots covering their faces to hide their identities. The voice-over runs down a list of contradictory positions held by the two politicians. The ad ends with the gray dots being removed to reveal that both politicians are in fact Bill Clinton.

The Bush campaign used this format against Kerry in 2004 with the Windsurfer ad.  The ad plays a video clip of John Kerry windsurfing, and used a video effect that reversed the image back and forth to make it look Kerry was changing direction with the wind. The fact that Kerry was windsurfing had the added bonus for the Bush Campaign of providing them with a chance to emphasize the perception of Kerry as a wealthy elitist.

The Bush Campaign used the flip-flop accusation in more subtle ways as well. In a key line from his acceptance speech at the Republican National Convention, President Bush said to the American people, “Even when we don’t agree, at least you know what I believe and where I stand.”3 As David Mark notes in his book Going Dirty this line of attack, presenting Kerry as flip-flopping and Bush as stable, “worked effectively to drive up Kerry’s negative ratings.”4 Republicans claimed the public did not know where Kerry stood on many important issues, because he “waffled,” concealed his positions, or even because Kerry himself did not know.

The flip-flop accusation made its way into the popular zeitgeist in some other forms as well. The comedy website JibJab produced a viral video featuring animated versions of Kerry and Bush singing to the tune of Woody Guthrie’s This Land. In the song the cartoon Bush sings, “You have more waffles/than a House of Pancakes/You offer flip-flops/I offer tax breaks.” The flip-flop metaphor also served as fodder for late-night comedians like Jay Leno who joked: “Kerry has a bad cold … In fact his voice is so bad, doctors have advised him to rest his throat and only give one position on each issue for awhile.” On another occasion Leno said, “Can you imagine when he and Bush debate? One guy can’t speak his mind and the other can’t make up this mind.”

Kerry gave his critics a bit of ammunition for the flip-flop accusation when he made one statement that will be remembered as one of the highlights (or lowlights, depending on one’s perspective) of the campaign. When asked about appropriations for the wars in Iraq and Afghanistan during a campaign event at Marshall University in West Virginia, Kerry said, “I actually did vote for the $87 Billion before I voted against it.”5 Kerry’s Republican critics shortened this to “I was for it before I was against it” and started repeatedly using that phrase in campaign speeches. The statement became an albatross around Kerry’s neck, and has remained one of the most memorable moments of the campaign.

The flip-flop accusation, although not new to politics, became one of the most rhetorically potent attacks against John Kerry in the 2004 race. It showed up in news coverage, stump speeches, late-night comedy, and even led to Bush supporters showing up at rallies dressed as flip-flops. In their final analysis of the campaign news coverage in 2004, the Center for Media and Public Affairs ranked “flip-flopping” as one of the leading campaign trail topics.6 As Damien Cave described it in The New York Times, it was “an 11-letter dig suggesting that Mr. Kerry [had] shifted policy positions frequently and [was] therefore weak, indecisive and more ambitious than principled.”7 This perception stuck with much of the American public and helped sink Kerry’s campaign.