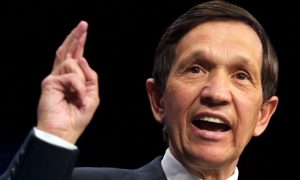 As a boy, Dennis Kucinich prayed to “be somebody” who would someday “do something important.”  Politics and George W. Bush enabled those prayers to come true.1 A political wunderkind in his twenties, national laughingstock in his thirties, and antiwar war icon in his fifties, by 2004, Kucinich had packed several lives of drama and redemption into one political career.

Born in 1946 to Cleveland, Ohio’s hardscrabble ethnic wards, the Congressman came naturally to his economic populism and anti-establishment views.2 Weaned in deprivation, he turned to school and politics for escape. In his early twenties, he won election to the Cleveland city council. At age thirty-one, he won the city’s mayoral office.3

Looking even more youthful than he actually was, the slight, five-foot-seven “boy mayor” took on all opponents and proved to be his own worst enemy. From the business community and civil servants to the city council and his own Democratic Party, Kucinich created a series of powerful nemeses. Refusing to alter course, he brought forth a political test that would define his entire career.4

In 1977, candidate-Kucinich vowed to never sell the Municipal Electric Light Plant, a city-owned utility that provided low income Clevelanders with cheap power. The council and business community, however, demanded the utility’s sale be part of any plan that would finance the city’s debt and avoid bankruptcy. In what had become typical fashion, the mayor refused. Soon after, Cleveland became the first major American city to go bankrupt since 1933.5

Not surprisingly, Kucinich lost the ensuing election in a landslide. Following his defeat, he sojourned for spiritual advice from his longtime friend and actress, Shirley MacLaine. Under New Age gurus, Kucinich became vegan and discovered a non-violent worldview that eschewed war and combined Catholic social solidarity with New Age sensibilities.6

In 1993, a Cleveland Plain Dealer story pronounced Kucinich’s 1977 refusal to sell the city utility the right call. Armed with a slogan, “Because he was right,” Kucinich reentered politics and took Ohio’s 10th district congressional seat in 1996. If not for George W. Bush, the Congressman would have most likely enjoyed a long career in the House and on cable news. A capable self-promoter, Kucinich tapped into the antiwar left’s animosity for President Bush to gain the limelight.7

Vying against Al Sharpton and Carol Mosley-Braun for the party’s leftmost voters, Kucinich possessed a key resource they lacked: star power. Danny Glover, Studs Terkel, Ani DeFranco, Bonnie Rait, Ed Anser, and Willie Nelson were among his high-profile supporters. His $5 million war chest might have been a fraction of the frontrunners’, but it dwarfed that of other “boutique” candidates.8 Though Howard Dean also used his antiwar bona fides to great political effect, his stance on every other foreign and domestic issue remained within the bounds of the Democratic establishment.

With a cadre of “star” supporters and deeply committed volunteers, the Kucinich campaign descended upon Iowa, host of the nation’s first presidential nominating contest. Iowa’s demographics and special status in the political firmament ensured that any over-performance would receive the media spotlight. In addition, Kucinich among all the boutique candidates took possession of one important issue: the antiwar left’s deep disdain for the Iraq War. In this regard, Kucinich was second to none.

As the House’s leading critic of the wars in Iraq and Afghanistan, the Congressman could claim leadership on the presidential campaign’s primary issue. Since Dean, Sharpton and Mosley-Braun were not in Congress, Kucinich was the only aspirant to have voted against the war. Moreover, he rallied 126 House Democrats to vote against the president’s policy. Kucinich was also free from general election concerns. This consistent record, combined with an offbeat manner and earnest tone, attracted many first-time caucus goers.9

In a normal year, the Congressman could have ridden a single issue to a respectable showing. The 2004 election was anything but ordinary. Iowa Democrats demonstrated a deep desire to defeat Bush, and nearly broke the record for turnout. However, though 75-percent of caucus goers opposed the war, many followed the sentiments of one Iowan who said of his vote, “I just think that Kerry has…the better chance.” Propelled by such pragmatic logic, Kerry took 37.6 percent of the vote; meanwhile, Kucinich earned one percent.10

Undeterred, Kucinich vowed, “This is a 50-state race. We’re going all the way.”11 Leveraging free media, sleeping in budget motels, and flying cut-rate airlines, the Congressman ran an unorthodox presidential campaign on a shoestring budget.

Ironically, the very forces, that had made Kucinich’s antiwar platform remotely viable had also rendered success in the primaries unlikely. Less interested in self-proclaimed “authentic” candidates than  pure electability” Democratic voters quickly coalesced around John Kerry. Thus, six months of slogging across the nation had netted Kucinich only 50 delegates.12

The self-described “Johnny Appleseed” might have planted seeds of “hope and justice” in his 15-month campaign, but he also antagonized many in his district. Staunchly Democratic, blue collar, Catholics were his district’s political backbone. To make a national run, Kucinich switched to a pro-choice position on abortion, and continued his unwavering commitment to gay marriage rights. These positions put him at odds with his own constituents.  By spring 2004, Kucinich’s approval rating with them had fallen to 29-percent.  In addition to his stances on wedge, social issues, Kucinich’s transcendental meditation and high-profile dissent made many image-conscious Clevelanders wince.13

Kucinich’s presidential run had redeemed his boyhood goal: to be somebody. A gadfly to many, the Congressman also spoke to farthest fringes of the liberal-left. Kucinich’s poor showing also revealed a Democratic Party that had learned the electoral lessons of the 1970s and 1980s. Mindful of the past, Democrats rejected quixotic candidates and coalesced around an establishment liberal, John Kerry. This pragmatism would prove central in shaping a hotly contested race.