The American voter possesses a curious relationship with Congress: never more so than in the 2004 election. In the three years prior to the presidential election, the institution’s favorability rating had plunged nearly fifty points.1 With gas prices and deficits surging, job numbers flat, and Iraq careening from one crisis to the next, the president encountered turbulent political waters. Unlike the president who staged a ferocious and efficient campaign to win a narrow mandate, 97-percent of all congressional incumbents cruised to reelection.2 Despite this dissonance between environment and results, congressional races revealed 2004’s political verities: a mandate for the president, an eroding political center, and a changing center of political gravity for the GOP.

In the months leading to the election, Democrats had every reason to believe they were poised for victory. Events had not only lined up in their favor, they had also won two special congressional races. Generally, a predictor of future political events the special elections seemingly augured well for the Democrats. 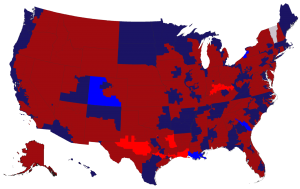 In the years preceding the election, Congress reflected the nation’s hyper-partisan political environment. Between 2001 and 2003, control of the Senate swung between Republicans and Democrats three times. The GOP maintained control of the upper chamber in the 2000 election, but lost it in late 2001 when Jim Jeffords caucused with the Democrats. In the 2002 midterms, the Republicans took back the Senate. Thus, the GOP entered 2004 with a one-seat majority. In the House, Republicans held a twelve-seat advantage. With such narrow margins, the congressional races mattered nearly as much as the marquee presidential matchup. Indeed, the 2004 election promised to shift the entire balance of power in Washington to one party.

With so much riding on the outcome, records sums of money poured into Senate and House campaigns. House candidates garnered $433 million, while $278 million went to Senate hopefuls; both parties amassed war chests sufficient to wage long, protracted campaigns.3 Unlike the 2002 midterms in which terrorism and foreign policy issues had nationalized the election, candidates in 2004 vied over local and state issues as much as they did on Iraq. The combination of gerrymandered seats and a motivated electorate meant that very few House seats were in play. A scant 23 House races, 5-percent of all seats, were decided by 10 percentage points or less.4

Opportunities to flip control of the House might have been scant, but the partisan fury boiled.

The combination of gerrymandered districts and the power of incumbency meant the GOP would retain a bare congressional majority. The post-2000 census redistricting efforts of both parties proved to be effective. Creating safe seats across the nation, both parties garnered, on average seven of every ten votes in their respective winning House races. Even in open seats, both parties cruised to wins in districts designed with decided partisan leans.5

The rough-and-tumble House political wars were hardly confined to the lower chamber. For Senate Democrats, erasing the GOP’s bare advantage always amounted to an uphill climb. Eight senators retired prior to the 2004 election. Of those, five were Democrats who hailed from southern states with Republican leanings: Georgia, the Carolinas, Florida and Louisiana. Meanwhile, Republicans also had the opportunity to compete for additional senate seats in South Dakota, Illinois, Colorado, and Oklahoma, and Alaska. These factors gave the GOP a profound advantage in the electoral map.8

Historically, senators have faced a much more competitive environment than House members.9 In 2004, however, the overwhelming majority of senate races were uncompetitive. With twenty-five of twenty-six incumbents winning an average of 64-percent of the vote, the battle for senate control was located in a relative handful of states. Fortunately for the GOP, George W. Bush carried those states and offered substantial coattails for Republican senate hopefuls. Thus, in nearly every contested race the GOP candidate eked out razor thin victories.

The win in South Dakota, while prominent, turned out to represent only the tip of the iceberg. Equipped with capable candidates across the country, the GOP scored victory after victory: former HUD Secretary Mel Martinez in Florida, Lisa Murkowski in Alaska, Richard Burr in North Carolina, and David Vitter in Louisiana. In sum, the GOP added four senate seats to their majority.

Bush’s victory combined with gains in both the House and Senate gave the White House credible claims to a mandate.  Despite the mandate, the congressional returns actually made the president’s ability to govern more difficult. The GOP defeated centrist, Southern Democrats—those lawmakers most inclined to work with moderate Republicans in passing Bush’s agenda. Any hope the White House possessed in passing Social Security and entitlement reform was lost when the likes Congressman Charlie Stenholm was defeated and Louisiana senator John Breaux retired.11 Thus, the president’s second term would be marked by an even more polarized Congress.

2Bruce Larson, “The 2004 Congressional Elections,” in Divided States of America: The Slash and Burn Politics of the 2004 Presidential Election (New York: Longman, 2005), 51.

3Carl Hulse and Sheryl Gay Stolberg, “Races to Determine Control of House and Senate have been Nasty, Expensive and Local.” The New York Times, 31 October 2004,  http://www.nytimes.com/2004/10/31/politics/campaign/31cong.html