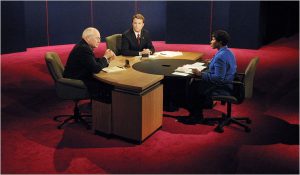 On October 5, 2004, Vice President Dick Cheney and Senator John Edwards (D-NC) squared off in the only vice presidential debate at Case Western Reserve University in Cleveland, Ohio. The ninety minute debate, moderated by Gwen Ifill of PBS and watched by over 43 million viewers, took place less than a month before election night, with the race for the White House virtually tied in national polls.1 Reflecting the intensity of this moment, Cheney and Edwards aggressively contested not only the other’s political viewpoints but the candidate’s credibility, and the validity of his statements. The debate featured both foreign and domestic issues, including national security, the war in Iraq, terrorism, health care, same-sex marriage, and taxes.

Using his trial lawyer experience, Edwards consistently indicted the Bush administration for its lack of transparency and for its unwillingness to accept responsibility for failed policies. “Mr. Vice President, you are still not being straight with the American people,” Edwards charged as he criticized the incumbent for misleading the public regarding the Iraq war and for falsely linking the September 11 attacks to Saddam Hussein’s regime. In line with Democrats throughout the 2004 campaign, Edwards sought to decouple 9/11 and the ensuing popular war on terrorism from the troubled and costly occupation of Iraq. Specifically, Edwards blamed the failure to capture Osama Bin Laden on the Bush Administration’s “decision to divert attention from [Afghanistan] and instead…plan for the invasion of Iraq.” He also went after Cheney personally for having done “business with Libya and Iran, two sworn enemies of the United States,” while CEO of Halliburton. Finally, Edwards questioned the apparent ease by which Halliburton secured a non-bid contract to conduct oil well firefighting in Iraq, suggesting a conflict of interest on the part of Cheney.

Assuming the role of the experienced statesman, Cheney countered that the Bush administration’s record on national security was exemplary, whereas he considered John Kerry’s history on the issue appalling. “A little tough talk in the midst of a campaign or as part of a presidential debate cannot obscure a record of 30 years of being on the wrong side of defense issues,” Cheney claimed. The Democratic ticket, he believed, was unfit for leadership and had nothing but a strategy for defeat in Iraq and the war on terror. Pursuing a line that became commonplace for the Administration well beyond 2004, Cheney rationalized that, WMDs or not, the “world is far safer today because Saddam Hussein is in jail, his government is no longer in power. And we did exactly the right thing.” The Halliburton charge, the Vice President brushed off as a political “smokescreen” without substance.

As Cheney went on the offensive, he sought to diminish Edwards’ stature. “Senator, frankly, you have a record in the Senate that’s not very distinguished,” the Vice President insisted. Attempting to portray his opponent as more interested in his personal career than in his Senate duties, Cheney jabbed at Edwards’ poor Senate attendance record, accusing him of missing key meetings in the Judiciary and Intelligence Committees and several major votes. “I am the president of Senate, the presiding officer…the first time I ever met you was when you walked onto the stage tonight,” Cheney claimed. Media soon demonstrated that Cheney’s charge was untrue but on the night, it served its purpose.2

The debate was equally contentious on domestic issues. Edwards criticized the administration for its failure to deliver on lofty promises on education, for the loss of millions of jobs, for tax cuts that benefitted the wealthy, and for supporting big business rather than the American people. “Mr. Vice President, I don’t think the country can take four more years of this type of experience,” Edwards insisted. Cheney, defending Bush’s record, instead sought to paint the Democrats as big government devotees. We “ought to let the American people keep more of what they earn and we ought to empower them to have more control over their own lives,” he contended. “I think the Kerry-Edwards approach basically is to raise taxes and to give government more control over the lives of individual citizens.”

It was on the issue of gay marriage, however, that the evening’s most memorable exchange took place. In 2004 the Democratic ticket still defined marriage as between a man and a woman. The Kerry-Edwards campaign, however, sought to distinguish their own support for “long-term committed” same sex couples’ right to partnership benefits and civil unions, from the Bush Administration’s push for a constitutional amendment banning same-sex marriage. Later reports alleged that Bill Clinton during the campaign urged Kerry to go against “Democratic interest groups by endorsing the Bush proposal” for a federal amendment but the Democratic ticket refused. From Edwards’ perspective, the amendment would be “using the Constitution as a political tool and it’s wrong.”3 Pointing to Cheney’s daughter Mary, who had openly identified as gay, Edwards insisted:

If earlier sparring had made Cheney appear bullish or contemptuous of his opponent, Edwards’ use of the Vice President’s daughter to score political points simply left Cheney seething inside. Refusing to get dragged into a debate over his family, however, his terse counter took the sting out of Edwards point. “[L]et me simply thank the Senator for the kind words he said about my family and our daughter. I appreciate that very much.”4

While some reporters were unimpressed with Cheney’s “lecturing” attitude and his dour mood which seemed to imply that the debate “was a waste of his valuable time,” most concluded that the vice president had been more effective than President Bush in the first presidential debate the previous week. Edwards too received credit for having “piled up the evidence, more clearly and more distinctly” than John Kerry had managed to do.5 “[I]f those famous few undecided voters were waiting for a real debate about different positions and philosophies, they got it last night,” the New York Times declared approvingly. In the end, polls divided over the winner. An ABC poll of registered voters gave the victory to Cheney. A CBS poll of undecided voters believed Edwards won the debate.6 Even if the inexperienced Edwards had impressed, the general consensus among pundits, however, was that he had done little to chink the incumbent ticket’s armor. “There was no single galvanizing moment, nothing that exposed either man as an empty suit,” insisted the Philadelphia Inquirer. Concurring, the San Francisco Chronicle summed up the general view: “This debate was a draw, more likely to rally the partisans on both sides than to change minds before the next Kerry-Bush debate.”7

4Dick Cheney with Liz Cheney, In My Time: A Personal and Political Memoir (Threshold Editions, 2012), 422-423. For an interesting discussion of the Mary Cheney story among consultants and advisors from both campaigns, see Kathleen Hall Jamieson, Electing the President, 2004: The Insiders’ View (University of Pennsylvania Press, 2005), 133-139.