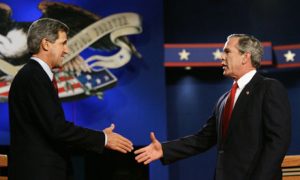 President George W. Bush and Democratic Presidential Nominee John Kerry engaged in three presidential debates in the fall of 2004.  The Commission on Presidential Debates, a non-profit and non-partisan organization, sponsored each debate.1  The debates took place at the University of Miami on September 30, Washington University in St. Louis on October 8, and at Arizona State University on October 13.

PBS NewsHour Anchor Jim Lehrer moderated the first presidential debate, at the University of Miami in Coral Gables, FL, on September 30th.  The main theme for the evening was foreign policy and homeland security.  The format of the debate was structured tightly with questions, a two-minute response from each candidate, and an opportunity for a short rebuttal after each response.2 President Bush offered his determined pursuit of the terrorist elements responsible for 9/11 as evidence of his resolve to keep America safe.  Senator Kerry criticized the diversion of military resources to Iraq that could be used in Afghanistan and also the failure of the Bush administration to maintain cooperative alliances with other nations.3  He also chided the Bush administration on going to war without proper preparation or supplies for American troops.  Kerry claimed, “I’ve met kids in Ohio, parents in Wisconsin places, Iowa, (sic) where they’re going out on the Internet to get the state-of-the-art body gear to send to their kids. Some of them got it for a birthday present.”[4] Bush insisted that the best way to protect American citizens was to “stay on the offense.”5 He also insisted, “I wake up every day thinking how best to protect America.  That’s my job.”6

Pollsters and pundits indicated that the American public tended to award victory in the debate to Kerry.  A CNN/USA Today/Gallup poll of six hundred fifteen registered voters indicated that fifty-three percent of those voters gave the win to Kerry while thirty-seven percent favored Bush.  Sixty percent of the respondents said that they attributed Kerry’s win to his ability to express his views with more clarity than Bush.  On the central question of the debate, those polled continued to give a slight edge to President Bush as the more effective commander-in-chief.7

Held at Washington University in St. Louis on October 8th, the second debate was moderated by Charles Gibson of ABC News.  The debate was structured in a “Town Hall” format in which the one hundred forty audience members, all undecided Missouri voters, submitted questions from which Gibson chose to pose to the candidates.8  The people who submitted the questions were given the opportunity to ask the questions themselves.  Highlights of this debate include one of the President’s most notorious “Bushisms.”  In response to a question about rumors that he was thinking about reinstituting the draft, Bush replied, “I hear there’s rumors on the Internets (sic) that we’re going to have a draft. We’re not going to have a draft, period.”9

CNN reported that their polling data indicated no clear winner the day after the debate.   Kerry had a slight advantage of forty-seven percent to Bush’s forty-five, a statistically insignificant margin.  Some pundits attributed Kerry’s slight statistical advantage to President Bush’s periodic sour facial expressions during the debate.   The two candidates sparred the next day in the media over these facial expressions.  Kerry insisted that Bush was gloomy over the state of the budget.  Bush proclaimed that Kerr’s negativity had prompted his expressions.10

The third and final presidential debate of the 2004 campaign was held on October 13 at Arizona State University in Tempe, AZ and moderated by CBS News Anchor Bob Schieffer.  The format of the third debate followed the same format as the first, while the theme focused on domestic policy.11  Despite the focus on domestic issues, the debate often harkened back to many of the comments on foreign policy from the first debate.  Kerry memorably pledged:

We’ll do whatever is necessary to be safe. But I pledge this to you, America: I will do it in the way that Franklin Roosevelt and Ronald Reagan and John Kennedy and others did, where we build the strongest alliances, where the world joins together, where we have the best intelligence and where we are able, ultimately, to be more safe and secure.12

The major domestic exchanges of the debate concerned the issues of employment, health care, education, and social issues.  When pressed to defend his record on the question of gay marriage, Bush responded:

Bush stated that he supported a constitutional amendment defining marriage in order to give the American people a chance to voice their opinions.  Kerry mentioned Mary Cheney, daughter of Vice-President Dick Cheney, in the exchange.  His reference to their daughter provoked the ire of the Vice-President who indicated afterward that he was, “a very angry father.”14

Kerry answered queries about reports that some Roman Catholic archbishops were telling people not to vote for Kerry because of his pro-choice views on abortion.  Kerry responded that he respected the views of his church, but, “I believe that I can’t legislate or transfer to another American citizen my article of faith. What is an article of faith for me is not something that I can legislate on somebody who doesn’t share that article of faith.”15

CNN early polling gave the edge to Kerry with forty-two percent of respondents saying their opinion of Kerry became more favorable after the debate with only twenty-seven percent saying the same for Bush.  Respondents, who represented a cross-section of people who had watched the debate on television, rated Kerry higher in terms of his ability to express himself clearly.16  Kerry’s favorable performance in the final debate did tip the scales in his favor.  Bush received fifty-one percent of the national vote to Kerry’s forty-eight percent on November 2, 2004.17