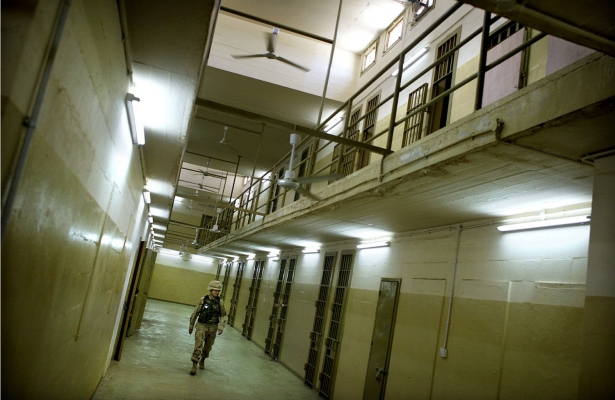 On August 4, 2003, U.S. troops reopened the Iraqi prison at Abu Ghraib. During Saddam Hussein’s rule, the prison acquired an infamous reputation as a place of torture and cruelty, but U.S.-led coalition forces had initially shut it down after the April 2003 capture of Baghdad. As the Iraqi insurgency intensified during the summer of 2003, the rise in American casualties increased pressure on intelligence services to gather better information from captured insurgents. In September, ground forces commander Lieutenant General Ricardo Sanchez authorized what The Washington Post called “high-pressure interrogation tactics,” including the use of dogs, sensory deprivation, and exposure to extreme temperatures.1 “The gloves are coming off regarding detainees,” wrote one officer in Sanchez’s headquarters. The reopening of the Abu Ghraib prison coincided with the coalition’s adoption of this “get tough” attitude.2

In October, a military police reserve unit from Maryland took responsibility for part of Abu Ghraib prison. Although prisoners had been treated poorly prior to the unit’s arrival, Staff Sergeant Ivan Frederick, who was in charge of the night shift, later admitted: “I took it to another level.” These guards routinely humiliated detainees by ordering them to stand naked in front of female soldiers, handcuffing them to other detainees in such positions that their genitals would make contact, and frightening detainees with growling dogs. Photographs of the abuse taken by military policeman Charles Graner have since become iconic images of torture.3

On January 12, 2004, after a well-meaning soldier tipped them off, the Army’s Criminal Investigations Division launched an inquiry into detainee abuse at the prison. Four months later, the news story broke. CBS’s 60 Minutes II broadcast some of the notorious photographs and Seymour Hersh, a Pulitzer Prize-winning journalist, published a series of articles in The New Yorker. The Army’s official investigation concluded that “sadistic, blatant and wanton criminal abuses were inflicted on several detainees.” Eleven soldiers were eventually punished. Several, Frederick and Graner among them, received prison sentences. Some commanders were censured, such as detainee operations chief Brigadier General Janis Karpinski, who was demoted to Colonel.  But no senior officers and no senior civilian officials faced prosecution. Due to the public turmoil that the scandal caused, Defense Secretary Donald Rumsfeld twice offered to resign, but President Bush refused to accept his resignation.4

With the Presidential election only months away, the scandal caused a public relations crisis.  The Bush Administration moved quickly to contain the damage. In May 2004, a Pew Research Center poll indicated that, for the first time, more Americans disapproved of the Bush Administration’s conduct (48%) than approved of it (44%).5 A May 11, 2004 CBS poll indicated that 65% of respondents believed that the torture had been limited to a handful of soldiers in isolated incidents. In a June 2004 ABC News/Washington Post poll, that number remained relatively consistent at 62%.6  Administration officials agreed, and stated that the abuses were confined to Abu Ghraib and were committed by several “bad apples” from a demoralized and incompetently led reserve unit. Rumsfeld acted as if he had been “blindsided” by the torture revelations despite having previously authorized techniques such as the removal of detainees’ clothing and use of dogs in December 2002.7

Republicans and Democrats generally responded to the scandal along party lines. In a televised interview, former Republican Senate majority leader Trent Lott deplored the “physical perversion” toward detainees, but supported harsh interrogation techniques that may “save some American troops’ lives.” “This is not Sunday school,” Lott continued, “this is interrogation; this is rough stuff.”8 Controversial conservative radio talk show host Rush Limbaugh called the scandal “a pure, media-generated story.” He declared that the soldiers’ actions were “no different than what happens at the Skull and Bones initiation.” The troops were simply “having a good time” and trying to “blow off steam.”9 For Limbaugh, Americans’ outrage toward the abuse scandal simply exemplified “the feminization of this country.” In contrast, the Democratic National Committee and Kerry campaign emailed their mailing lists asking Democrats to insist that Bush fire Donald Rumsfeld for failing to prevent the Abu Ghraib torture.10 On June 23, Democratic Senators Patrick Leahy and Dianne Feinstein tried to subpoena documents related to detainee abuse. The measure failed in a 50-46 vote that split along party lines.

The Administration reacted to the Abu Ghraib story by framing the scandal in ways that appealed to voters’ preexisting values and beliefs. In May 2004, President Bush called the scandal “disgraceful conduct by a few American troops who dishonored our country and disregarded our values.” He consistently reiterated this theme and insisted that the torture incidents would be transparently investigated and the perpetrators punished. Finally, he contrasted his Administration’s behavior with that of Saddam Hussein, whose “trained torturers were never brought to justice under his regime. There were no investigations about mistreatment of people.”  Under his administration, things would be different: “There will be investigations. People will be brought to justice.” Many Americans appeared willing to accept the Administration’s explanations, and the domestic media furor had largely subsided by July 2004—several months before Election Day.11

7For an excellent collection of formerly classified government documents, see The National Security Archive, “The Interrogation Documents: Debating U.S. Policy and Methods,” July 13, 2004. http://www2.gwu.edu/~nsarchiv/NSAEBB/NSAEBB127/. Accessed May 28, 2014. The memorandum that Rumsfeld authorized on December 2, 2002 is available at http://www2.gwu.edu/~nsarchiv/NSAEBB/NSAEBB127/02.12.02.pdf. Accessed August 7, 2014.

11See Interview with the President by Al-Ahram International. May 6, 2004. http://georgewbush-whitehouse.archives.gov/news/releases/2004/05/20040507-7.html. Accessed August 7, 2014 and “Interview with Al-Hurra Television.” May 5, 2004. http://2001-2009.state.gov/p/nea/rls/rm/32282.htm. Accessed August 7, 2014. Also quoted in Walter Edward Hart, “Framing Abu Ghraib: The Interaction of Presidential Rhetoric, the Media, and the Public in the Culture Industry’s Cycle of Assumptions,” Paper presented at the biennial conference of the Inter-University Seminar on Armed Forces & Society, Kingston, Ontario, November 3, 2012. http://tamu.academia.edu/WallyHart/Conference-Presentations. Accessed May 28, 2014.